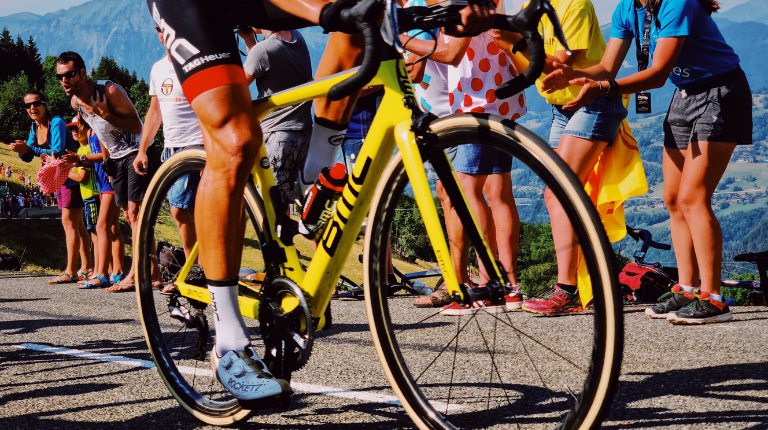 Read on to learn the origins and secrets of the most famous French race.

Cycling around the contours of France’s wonderful countryside is one of life’s great pleasures. You can explore the natural twists and turns of the scenery at your own pace, stop when you like, even have a picnic. If you avoid the busy towns and cities, you almost have the roads to yourself. Many of our guests bring their own bicycles when they visit our self-converted mill in southwest France – and who can blame them. The less energetic may bring electric bikes or ride motorbikes for the pure joy of touring the landscape. Whatever the motivation, there is something special about travelling on two wheels, the open air, the breeze in your face, travelling off-piste even, or perhaps that phenomenal sensation of generating motion with a simple press on the pedal. All contribute to bringing out the explorer in us.

But you know the French! They are never satisfied with the sheer joy of a gentle trundle around the countryside, enjoying the fresh air and scenery. Instead, they just had to turn this relaxing activity into the most physically demanding human endurance test. Now, after a hundred and eight years of competition, this most gentile of all pastimes has changed completely. Speed and endurance have taken over, preferences have altered beyond all recognition, transformed from an individual inclination into an action-packed team game of constant competitiveness, excitement, and danger.

They call it ‘Le Tour de France.’ If the name implies a form of a sightseeing trip, it is quite the opposite! It is unlikely that any of the participants will see much of what surrounds them. Instead, they will be watching the guy in front, trying to gauge his next move, whilst keeping an eye on those that follow. The Tour de France is a fast-moving game of chess. This is a team sport with a considerable difference; only one person can win the race. The team behind him has one purpose in life. To use every available tactic to get its team leader to win. They are his pacemakers, protectors, and shelters when the going gets tough and rough – and it does!

Additionally, if the opportunity arises, the team aim to gain any slight advantage or use whatever means to disrupt other sides’ efforts. The whole team strives to serve one person and outwit the opposition. One mistake from any of them could cost the race. It is a highly organised and sophisticated, strategic team sport.

This exciting sporting event did not arise from glorious intentions. A failing newspaper called
‘L’ Auto’ started the race in 1903 to boost its flagging sales. Apart from the interruption of two world wars, it has been growing in popularity ever since. Unfortunately, the occasion does not have the most salubrious backgrounds—numerous instances of scandals and cheating have arisen throughout its history. In its second year, it was alleged that the winner hopped on a bus or car in between cycling. He was disqualified. American Lance Armstrong was stripped of his seven consecutive winning titles in modern times for using drugs. Even today, winners go through frequent allegations of cheating and testing simply because the stakes and passion the race generates are so high. Although many more have been suggested, at least 14 tours have been marred by proven or admitted doping scandals.

The event in 2021 is the 108th. The ‘Grand Depart’ will take place from Brest, in Brittany, on June 26th, 2021. As usual, the finish will be in Paris via the Champs-Elysees on July 18th, 2021. The course distance is 3,383 km (2,102 miles); each day is called a stage. The race encompasses six Mountain stages, four Medium Mountain stages, two Time Trials and eight Flat stages. Several of the summit finishes are the most extreme and challenging of all. 23 teams will take part, 19 regular teams plus four pro teams.

The stage winner with the lowest aggregate time wears the famous yellow jersey. Until somebody else wins the following stage. There are numerous colour jerseys, a green one for the leader of the points classification. The highest prized of them all is the yellow polka dot jersey. Worn by the leader, or ‘King,’ of the mountain stages. The white jersey signifies the young rider leader. Colour jerseys can represent leaders of various tour segments, but you might need a paint colour chart to spot them all.

In keeping with many prominent sports, top cyclists can earn a lot of money. The best around £3-5 million a year on a graduating scale downwards. The lower graded cyclists are way below that, maybe £30-40,000. Winners of the Tour de France tend not to accept their winnings. They distribute the money amongst the team. The money for them is in promotions.

French riders have had the most success at the famous race, with 36 tour wins in total. Belgium has the second most tour wins with 18, their most successful competitor being Eddy Merckx with five wins. He is famous for being the only person in the tour history to win all significant classifications on his first win in 1969. Spanish riders have 12 wins between them, and Italy has 10. Even Luxembourg has five wins to its credit. Ireland gained a victory in 1987 with Stephen Roche. The USA would have been up there except for the disgraced Armstrong’s seven disqualified wins. Sir Bradley Wiggins was the first English winner in 2012. Chris Froome followed him to be the second successive British winner in 2013 but crashed out in the early stages in 2014. He regained the title in 2015 to be the current champion and has won an army of British fans.

Parcours: The course.
Attack or Break: When a rider/riders make a sudden acceleration to break free of the pack.
Paceline: Like drafting, team members take turns leading from the front to enable other team members to ride in their others slipstream.
Pull: A rider’s turn at the front of the Paceline.
Peloton: The main bunch of riders cycling together as a pack.
Domestique: Each team member used to work, support, and pace the team leader.
Classic: One of the one-day prestige races. Winning one of them can make the career of the winner.
Category: The level of difficulty of a mountain climb. There are four categories, with the hardest one rated one.
Criterium: A bike race with multiple laps around a short circuit or a city course. Riders need to have excellent handling skills and lots of power to negotiate the corners and diversions.
Field Sprint: A frantic race to get the best placing among the team at the end of the race.
Time Trial: A race over a specific distance against the clock.
King of the Mountains: Winner of the Grand Prix over the mountains. He gets the polka-dot yellow jersey.