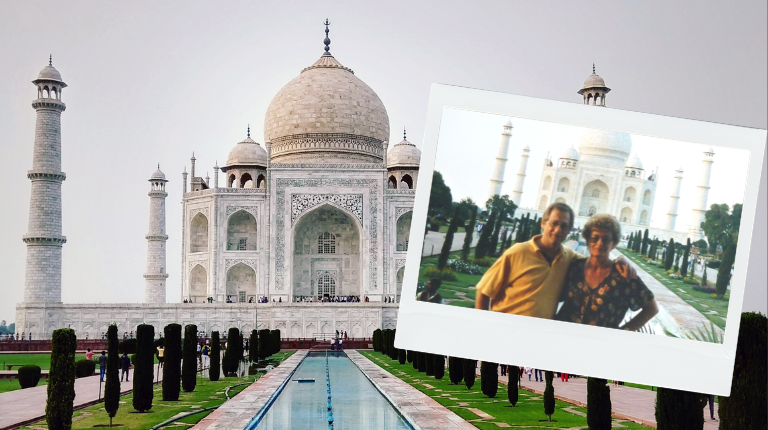 This post is in sympathy and respect for the people of India.

Millions are now fighting a terrible battle against a devastating outbreak of Covid-19. Many have lost their lives, a toll exceeding 200,000 to date. The oxygen and medical treatment available having stretched past all limits—the number of cases is rising on an exponential scale daily. Families are having to build funeral pyres for their dead relatives.

We feel deeply for the people of India, a country that, despite its size, is way behind in practice and resources for dealing with the Virus. We visited India in 1996; it left a lasting impression on us. It was not just the amazing sights we saw, but the diversity of cultures and the friendliness of the people which made it an unforgettable journey.

Our journey took us around the famous ‘Golden Triangle’. Starting in the chaos of Delhi, travelling onwards to the Forts and Palaces of Jaipur and Jodhpur and of course Agra, the home of the Taj Mahal. Of all the sights India offers, the Taj Mahal is ‘The Jewel.’ In the 1600’s Emperor Shah Jahan built it as a mausoleum in memory of his favourite wife, Mumtaz Mahal. Our visit was early morning, why, we did not understand at first. Once inside the entrance, we stood behind the raised bench, which precedes the central canal immortalised by Princess Diana’s solo and sad visit some four years earlier. A thick mist shrouded the mausoleum, providing a temporary feeling of disappointment. Then the reason for the early start became clear.

As the morning sun gently rose, the heat from it unveiled the construction. The mist rose slowly, gradually unfurling from the ground and ascending to the top of the slender minarets which characterise the mausoleum’s four corners. The light cloud dissipated into the blue sky. This magical moment was akin to a giant curtain lifting over the most wonderful of India’s treasures for all the world to see. On display before us, The Taj Mahal. The most beautiful and spellbinding example of Islamic architecture and artistry. A sight never to be forgotten.

Our next port of call was Goa in South-East India. An ex-Portuguese colony, south of Mumbai on the Arabian Sea. The long journey in an ancient coach was not the most comfortable. The driver navigated through the slalom of cars, bicycles, lorries, cows, elephants, and tractors—plus the debris of many vehicles damaged beyond repair and left to rot wherever they had stopped. At regular intervals, we saw the saddest of all roadside attractions, cruelly treated animals on show. Often, bedraggled bears in chains, beaten to dance for human pleasure. During the journey, I fell ill despite all the medications brought from England for this eventuality. I arrived at our hotel, poorly and weakened, neither wishing to eat or move. While Susie breakfasted, I retired to the hotel’s shaded, open-air lounge. On the television was the World Cup Cricket, a passion in India. I settled in a chair to watch, genuinely sorry for myself.

The lounge was empty except for the hotel staff. But, after an hour of relaxation, a buzz of activity and people began to fill the area. My solitude was interrupted as staff began placing chairs all around me in front of the television; people immediately sat on the chairs. A waiter told me that a crew would be making a movie in the hotel and grounds.

‘It will be for the big screen, sir.’

‘Are the people sitting around me the stars?’

‘Oh no, sir. They work for the stars. They are in rehearsal near here and will arrive when they finish.’

A Bollywood film, maybe. Dancing and singing, perhaps. Soon after, a group of immaculately dressed people entered the lounge. There was no doubt who the stars were! They headed for the chairs surrounding me, which were immediately evacuated to make way for them. They all acknowledged me, saying hello in perfect English as they sat down. I said hello, back.

‘Here for the Cricket?’ I asked one of them.

Then a bald Indian man in a flashy shirt entered and asked a few people to leave with him, which instigated a reversal of the musical chairs procedure. My new friend told me they had to film now.

As they watched the cricket, the film celebrities ordered drinks, all non-alcoholic, and asked if I would like one too. I accepted a beer and thanked them. A break in the game came, more drinks arrived, plus another for me. One man politely asked me if I minded if he smoked. No, I told him, of course not.

‘Occasionally at Christmas, a small cigar.’

His hand went up, and a minute later, a waiter came to me with a box full of large cigars, offering them to me. I politely declined.

‘Please, try this one,’ said my smoking friend, taking a cigar from the box. ‘It is very mild, and you will enjoy it.’ Not wanting to offend, I accepted his kind gift. He cut it and lit it for me. I took a puff and told him that he was right; it was indeed a beautiful cigar. The comment pleased him.

It was great being feted by the Indian celebrities and unique that they took such an interest in me—many fussing over me like mother hens. At the same time, they told me what they did in show business. They turned out to be prominent and exciting figures in India, some outright film stars, others on television. I never thought to ask the name of the film.

In a few short days, the filming was over. My new friends moved on to the next film set, and I needed to recover my health. They had improved my mental spirits, but the beers and cigars did nothing to help cure my malady. Susie called for the Doctor. I showed him the medications I had brought with me.

‘No,’ he said. ‘Indian problem, Indian solution.’ He left me with both tablets and liquid medicine. The issue was gone in twenty-four hours. Finally, we could explore the Goa region.

To our surprise, the local people were much like the celebrities: happy, humorous, helpful, and welcoming. Away from the frantic cities we had travelled through, the locals had a much more tempered approach to life and foreigners like ourselves. It was easy to see how the effect of Portuguese colonial influence had transformed them in many respects; they had adopted European attitudes. We spent two idyllic weeks in Goa, by which time we grew a strong affinity with the people and culture.

One day soon, we hope to return.