You've Got to Have a Dream 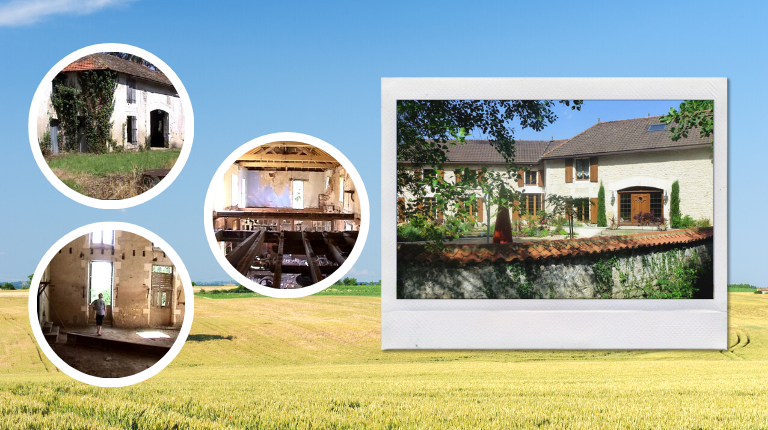 It may be a simple old song with a corny title, but the sentiments are so true. Humans have an incredible ability to look ahead, plan, have visions, A desire to have or make something better, whatever it may be. It is not just for the clever or powerful; it is in everyone’s head and heart deep-set in whoever you are, whatever you are; it is something you should be proud to have. Let us call it a dream because often, that is how it all starts. A dream, a notion, an idea. Let me tell you about one of ours.

It started with a few crazy ideas, retire early, and get out of the rat race. Find a business where customers come to us instead of the other way around. It was not a long-held romantic dream; we just reached an age when we started thinking about life in the future. Part of the dream was a grand house in the country; add to that, beautiful gardens, perhaps a river with running water trickling along. Trees to create dappled shade on sunny days. The sort of house people would want to visit. Is that too much to ask? A topsy-turvy mix of ideas and dreams. The thoughts built slowly but did not go away. The problem with having these dreamy moments is they do not come in much detail. Our thoughts at that stage came with fuzzy edges.

We had been fortunate in life to have travelled extensively, and, as the adage says, travel broadens the mind. It gives you a different perspective on life and opens your mind to other options. And that was how it was with us. Of course, we like the UK and the many lovely places, but, over time, the appeal of a quieter, more alfresco lifestyle with added sunshine became a great draw for us. It is a path many have trod before us. That was the time when the idea manifested itself into a dream. Some call it a lightbulb moment.

So, we reached for the sky, in pastures new, seeking a place where the stars are brighter. The warmer climes and the love of the great outdoors offered substance to our dream, developing it further but not moving it any closer. The pace of our search increased. Age never dampened our desire; it made it more critical. A new feeling grew inside, telling us to be out of the ordinary. It grew stronger day by day. It had to be something that would excite and motivate us. A complete change of lifestyle? Whatever it was, it needed to happen and quickly. We were ready for a new adventure. The children were grown, giving birth to their own; we would never be far from them. Yet, the mystery remained; frankly, we did not know what we wanted or where we wanted it to be.

Susie always said, ‘We will know when we see it. Let’s pin it down.’ She was correct as usual. Where? France was always an attraction for us. Beautiful green countryside- just like home, without the masses of people, the density of cars and buildings. We had always loved those fantastic stone character houses in rural France. Property cheaper but with bags of personality. A beneficial exchange rate, easy travelling. The more we considered French life, the more we liked it. It was hard to believe it had taken so long; why such a tough decision? We had been to France many times and always enjoyed it. But the question mark loomed over the idea. The French!

Susie had her own business for many years; many of her products originated from France. Every year we made trips to Paris in Spring and Autumn for her to buy stock. We grew to love the city, but everything was so chaotic, so fast. In those younger years, we found the Parisians so aggressive and often quite rude. Driving in Paris was equivalent to banger racing. On reaching the Paris periphery, Susie would shut her eyes; I would move into the centre of the madcap city, gripping the steering wheel, focussing only on straight ahead. Doing business in Paris was tough, and it coloured our view of all French people and the way of life in France. Only our love of the city remained over the years.

The notion of moving to France would not go away. People we knew mentioned that they had a property in the Charente. They invited us to visit them, suggesting they show us around. Much to our surprise, we found the French people in the Charente charming, helpful and welcoming. It turned out to be the end of our search and the beginning of a new life.

A short search found our nirvana. A grand 300-year-old French water mill on the river. One big problem. It was a derelict, uninhabitable building in a terribly dilapidated condition. Even the gardens were jungles not to be entered. Would we dare take on the mammoth task of renovating it? Never having been a builder or having the skills to become one. In saying that, I had been involved in working on significant projects in my working life.

People often tell you that there is nothing wrong with dreaming, but dreams do not come easy! Many people dream of winning lots of cash, and why not? But the chances of being lucky are one in millions. For less fortunate mortals, like ourselves, having a dream, or wanting something different, and making a dream come true errs less on the side of luck but more on the muck and bullets of hard work. There is something rather special about the moment you begin working on your dream, although people forget to tell you that it comes with the odd nightmare thrown in.

Now, our customers come to us, many of them more than once. They tell us how beautiful the Moulin is. Indeed, music to our ears. Yes, it took time, but time is not relevant. Building a dream does not count. Now it is done, and the years we spend here are as temporary custodians of such a magnificent historical structure created by a labour of love. What an immense pleasure to have been part of a restoration that not only recaptures so much of its ancient heritage but gives it a future for hundreds of years to come.

We are getting a little ancient ourselves these days, but we can still puff out our chests with pride at what we have achieved. Now, when people ask us why we put ourselves through such hard work and pain, together with the cost of buying and rebuilding a tumble-down old water mill in France at our time of life. We say it is no different to asking a mountaineer why he climbed that mountain. Because it was there, and we could. It is a very personal gift to have done what we did. Perhaps, no great shakes in this complicated world we live in. But, to us, it is something special.

Was it a dream? Of course, it was a wonderful dream. But the work, stress, pain, and money are all irrelevant. What is money except a means to sustain you? What is work but the opportunity to create? What is stress if it is not the emphasis and privilege of toil to rebuild a small part of ancient history? We never considered it work; it was our privilege in life.